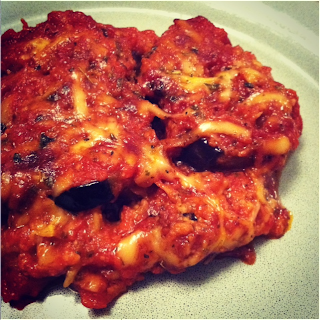 The day before Christmas Eve was the anniversary of my Grandpa Ugo's passing.  I was three years old and unfortunately don't remember much about this talented man.  But I do remember his hugs and kisses and am happy to be left with at least that memory!  Luckily, Ugo lives on through my mom, especially through her authentic Italian cooking.  My Grandpa was a cook in the Navy during WWII.  His family owned a Pizza Parlor in Chicago and he later owned a deli in California.  My mom was smart enough to get in the kitchen when she was young to learn his secrets and finesse and she has been able to pass this down to me over the last couple of years.  So, to celebrate Ugo's life and cuisine, the family and I prepared his Eggplant Parmigiana.  We usually make Grandpa's homemade sauce for something like this, but due to the crazy holidays we simplified things.
What you'll need: 4-6 servings 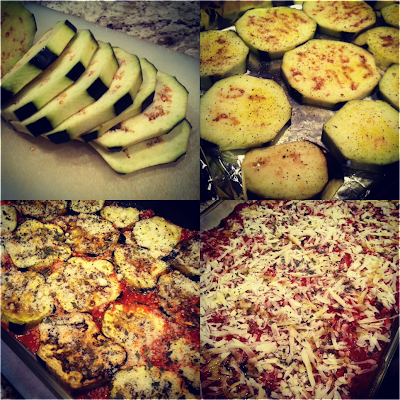 Not everyone likes the skin on the eggplant, so we like to remove part of it to take away some of the bitterness.  Cut up the eggplant leaving each slice about 1/2 inch thick.  Place the slices on a baking sheet and brush both slides with olive oil.  Sprinkle some salt and pepper on one side of the eggplant and pop into a 375 degrees oven for about 30 mins or until the eggplant has soften and turned a light golden brown.

Now for the fun part... the layering!  Let the eggplant slightly cool so you can handle them.  Place a thin layer of marinara sauce on a 9 x 13 inch baking dish.  Put a layer of eggplant on top of the sauce and sprinkle a healthy amount of parmigiana cheese.  Add some basil and oregano.  Then start again.  Put another layer of sauce, eggplant, cheese and spices.  Layer it one more time with just the sauce, cheese and spices and sprinkle a small amount of olive oil on top before you pop it into the oven again at 350 degrees for about 45 mins or until the cheese is nice and brown and the juices are bubblin'.

This tastes great hot or cold.  I like to eat this by putting a big dollop of the eggplant on some toasted french bread with a glass of vino.  Mmm
Posted by Christina Marie at 10:14 AM