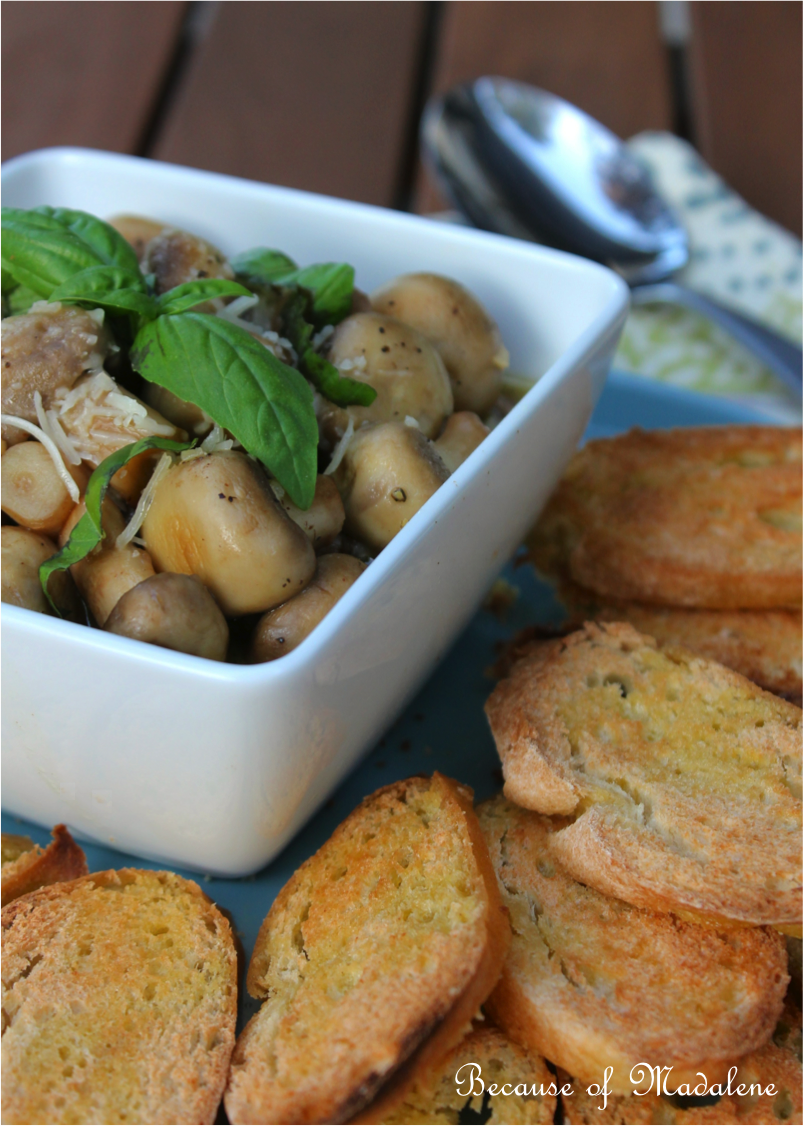 As a typical picky kid, mushrooms were the last veggie on earth I wanted to eat - get the pun?  I know, it was bad, moving on...  Their spongey and dirt-like characteristics were just too bizarre for me to ever want to associate with.  But then one day, when I discovered these little foreign creatures could be smothered in butter and wine and topped on crispy crostini, they weren't so bad!  In fact, they were absolutely delightful - covered in rich flavors to disguised their distinguished earthy taste, they quickly became one of my favorite veggies.  This particular Italian recipe cured me of my mushroom phobia and eased me into the wild world of shroomy appreciation and love.  Now, any excuse to put mushrooms in a recipe, they're tossed in!  Pizza, casseroles, salad… which is why they're due for more stardom than we often give them.  There is no mistake that these buttoned shaped goodies are the center of deserving attention with this filling appetizer.  And despite this dish typically considered as a starter plate, its heartiness can easily turn this into a small meal for one. In a large skillet over medium heat, add the olive oil and butter.  Just as soon as the butter melts, toss in the garlic and stir to avoid burning.  After a minute or two, add the mushrooms, salt and pepper and sauté for about 5 minutes.  Depending on how much the mushrooms absorb the oil and butter, add another tbsp of oil if needed.  Pour in the white wine, turn the heat down to medium-low heat and simmer for another 10 minutes.

While the mushrooms are simmering, prep the crostini.  On a foil-lined baking sheet, line up the baguette slices and drizzle with olive oil.  Place in the broiler until crispy and golden brown, 5 minutes or less.

Transfer the mushrooms and sauce into a bowl, top with parmesan cheese and garnish with basil.  Serve hot along side the toasted crostini on a platter or plate.
Posted by Christina Marie at 1:39 PM 28 comments: