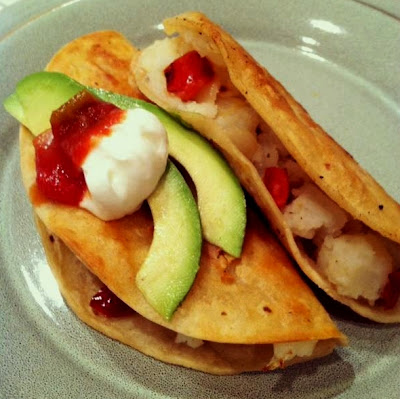 I'm so excited about Potato Tacos!  I first tried them at a Mexican Restaurant a few weeks ago, fell in love with them and knew I just had to try them at home.  They turned out amazingly delicious (better than I thought they would) and the key to them is seasoning and garnish, since you don't have the juicy flavors from meat.  I added red bell peppers and onions to semi mashed red potatoes and topped the tacos with slices of slightly salted avocados, salsa and sour cream.  They're reminiscent of breakfast potatoes stuffed inside a crispy tortilla.  Yum!

What you'll need:  Makes about 15 tacos 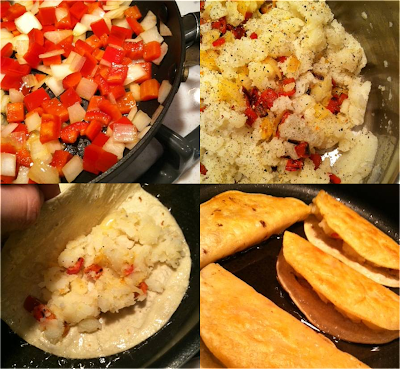 In a pan, saute the bell pepper and onions (with a tbsp of oil) until soft.  While those are cooking, boil the peeled red potatoes until soft.  Strain and slightly mash so that they're still chunky.  Toss in the bell peppers and onions, 21 Salute seasoning, some crushed black pepper and a couple of big pinches of salt. Mix until combined.  In another pan, fill it with canola oil so it coats the entire bottom of the pan (over medium heat).  As soon as the oil is hot, place half of a corn tortilla into the pan (holding the other half with your hand).  Place a couple of tablespoons of potatoes onto the half of the tortilla that is in the oil.  Then fold down the other half over the portion that is filled with potatoes.  After a few minutes flip over the taco and cook the other side of the tortilla for another few minutes.  When the taco is golden brown, you know it's done.  Do the same for the rest of the tortillas.  Drain the tacos on a cooking sheet lined with paper towels to soak up any remaining oil.  Serve hot topped with the garnishes!
Posted by Christina Marie at 8:11 AM