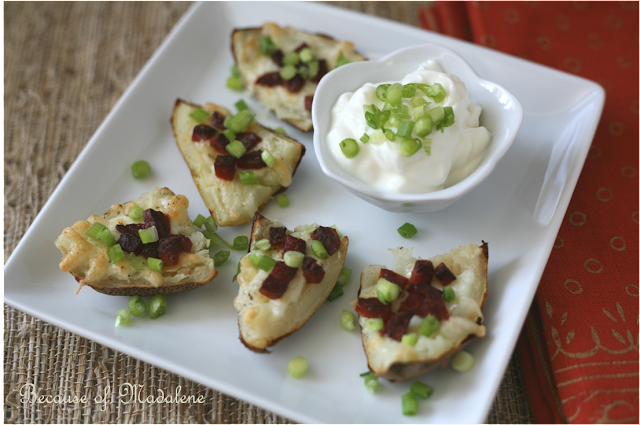 I had some leftover mozzarella cheese and spicy pepperoni from last week's Pizza Quesadillas.  So I thought I would use them again for another traditional appetizer turned Italian - Potato Patata Skins!  Now, don't get me wrong, I love bacon, but do you ever find it a bit of a chore to cook up?  It's messy whether it's in the pan or oven and it takes time to get it extra crispy... just the way I like it.  So I discovered this week that using pepperoni instead for a crispy topping (like potato skins or stuffed potatoes) is such a great alternative!  Not only is it faster to cook and just as crispy, but its flavor is more intense and its spice adds a nice kick to whatever you top it on.  If only Grandma Madalene knew...

Preheat your oven to 400 degrees.  Wash, scrub and pat dry the potato.  KEY:  To ensure a crispy skin, brush a thin layer the canola oil all over the skin of the potato and drizzle on kosher salt for extra flavor.  To avoid a potato explosion, with a fork poke a few holes throughout the potato.  Uncovered and on a foil lined baking sheet, place in the oven for about 45 mins or until tender.

While those are baking, toss the cubed pepperoni into a small pan over medium heat.  Let them render and crisp up for about 5 mins.  Toss every couple of mins for even crispiness.  Drain on a paper towel and set aside.

Once the potatoes are out of the oven, let cool for about 10 mins for easier handling.  Cut the potatoes in half by length.  Scoop out the middle of the potato flesh but leave about a 1/2 inch around the edges.  Cut each half in half again (by length) and again (by width) to create bite size triangular pieces.  Lay back down on the foil lined baking sheet.  Layer on the mozzarella cheese, pepperoni and black pepper.  Pop them under the broiler for about 5 mins or just until the cheese starts to turn golden brown.  Serve with sour cream and eat while they're hot! 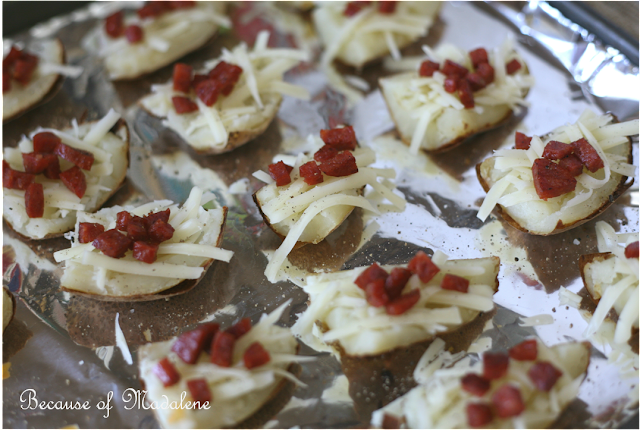 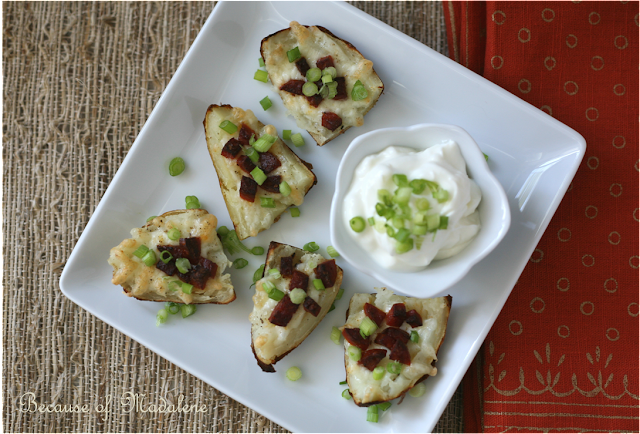 Posted by Christina Marie at 11:21 AM