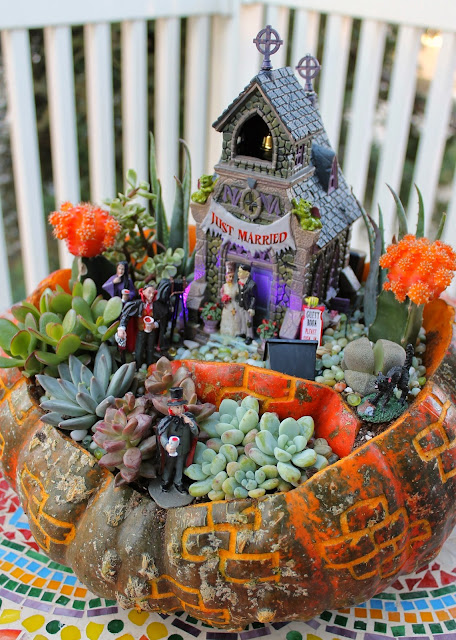 And the winner is...

This fun little Halloween project won for the best Pumpkin Carving Contest at work on Thursday!  Sure it only competed against one other beautifully carved one, but I'd like to hope it could have been a real contender if others participated.  Do you remember last year's?  Because there was so much competition a year ago, I felt I had to boost up my game this year, so I went all out!  Ironically, everyone was more interested in winning the free lunch outing for best group costume contest instead.  So the only cash prize being offered for the day was handed to me.  :)

But I loved how my little whimsical Halloween scene came about and it also turned into a fun decor for the home.  And even though Halloween is over, this versatile potting project could also be done for Thanksgiving by using pilgrim figurines or the winter Holidays by using a white cinderella pumpkin and winter scene houses instead.

And because carved pumpkins only last so long, this garden will have to be transported in the next few days.  But if you have a Thanksgiving or Holiday party coming up, this will make a fun conversation piece for the evening. 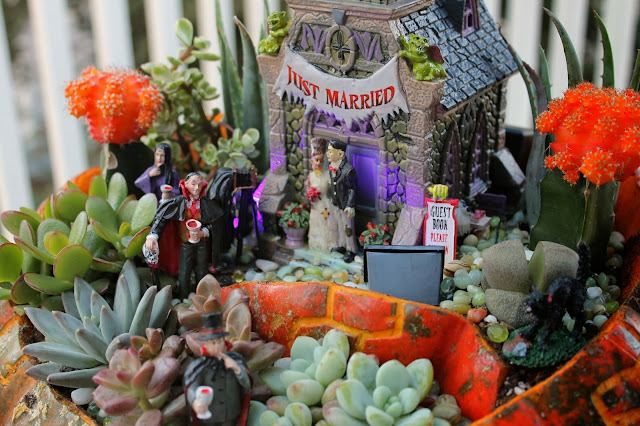 Carve a very large hole out of the top of your pumpkin, large enough to fit your entire scene.  Clean out the inside.  Use a pumpkin sculpting tool to create the brick-like carvings on the outside wall of the pumpkin.  Cut a rectangular piece out of the top part of the pumpkin for an interior wall.  Add some brick-like carvings to this, too.  Insert three toothpicks into the bottom of your interior wall piece and place into the pumpkin.  This will stabilize the wall.  Fill the pumpkin with potting soil and layer in your Halloween scene and succulents.  Cover any exposed dirt with the pebbles.  Once you're finished potting, water the succulents.  Transfer a few days later into something else once the pumpkin starts to wilt. 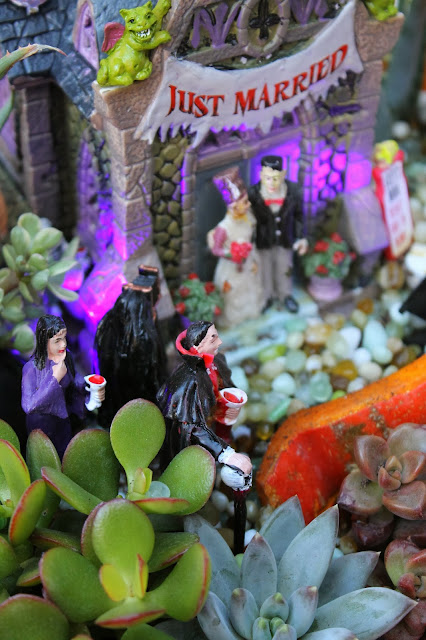 Posted by Christina Marie at 10:19 AM