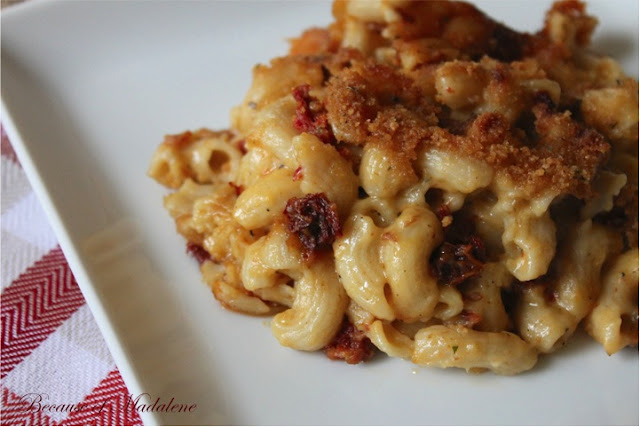 One of the things I miss most about being gluten free is having to give up the fun game of comparing restaurant's gourmet Mac and Cheese with one another, and then finally finding that perfect one and never being able to go anywhere else for it but there because that particular restaurant figured it out.  Does anyone else do this?

So I thought I would do my own comparison at home instead.  And the one that fit the bill was this creamy and rich Sun Dried Tomato Mac and Cheese served in a three cheese blend.  Despite all the yummy cheeses, Mac and Cheese can often turn bland.  But adding sun dried tomatoes give this classic dish some Italian flare, a punch of tang and decadence.  The choice of cheese is also important.  And because I was looking for a richer taste, using mostly extra sharp cheddar did just that (but also added gruyere and fontina for a creamier texture and flavor balance).  But you can't just stop there. In my book, it isn't really gourmet Mac unless there is a buttery, crunchy breadcrumb topping to finish it off. 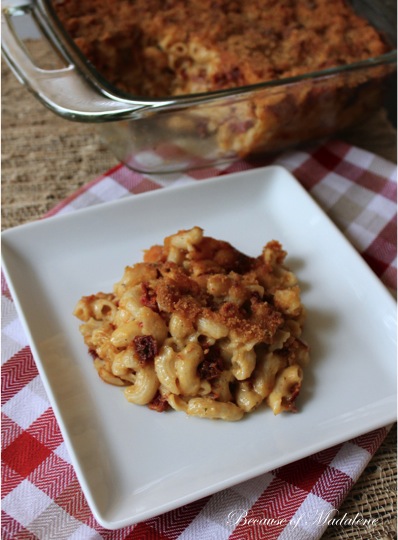 Cook and drain the pasta.  Boil about 1 - 2 minutes less than the packages says.  It will continue to cook in the oven.   Set aside.

In a medium size pot over medium heat, melt the butter and add the garlic, let the garlic cook for a couple minutes.  Then create a roux (or rue) by adding the flour to the butter mixture.  Whisk until combined.  Slowly add in the milk (a couple tbsp at a time), continually whisking until lumps are dissolved. Toss in the basil, oregano and pepper.  Reduce the heat to low and let the sauce slightly thicken over the next 15 mins or so, whisking often.  Once thickened, remove from heat and add in the three grated cheeses and sun dried tomatoes (taking off the heat prevents congealed sauce).  Stir until mostly melted.  Gently fold in the pasta until completely incorporated. Transfer to a greased baking pan.

Combine the breadcrumbs, parmesan and herbs.  Distribute evenly over the top of the pasta.  Dot the topping with the cubes of butter (about an inch apart from each other).

Bake in a 375 degree oven for 35-45 mins or until the topping is golden brown and the sauce is bubbling!  Serve hot!
Posted by Christina Marie at 7:47 AM