Mama Bird for the Day 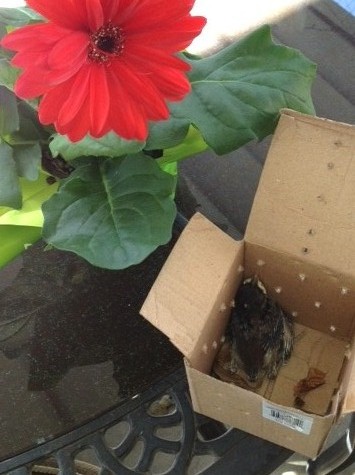 The last couple of days has been bitter sweet in my animal loving household.  Yesterday morning, my mischievous cat, Wyatt, was waist deep in ivy rummaging for something.  I thought it was a small mouse until I saw something small fluttering - a baby mockingbird, whose nest was hovering just above in our bottle brush tree.  His mama was not too happy with this and frantically tried to save her little one by dive bombing Wyatt.  But this persistent cat doesn't let anything stop him once he puts his mind to something.  Fortunately I was able to yank Wyatt away from his play toy and put him in the house for time out!  I was able to rescue little Petri (I named him) and put him in a small box with breathing holes.  I called the animal hospital and they advised me to put Petri back in his nest.  So Pop climbed up the ladder and plopped him back into his home.  Just in case he tumbled out again, I put a table underneath with several cushy towels for a softer landing.  A couple hours later (after I reluctantly went off to work), my folks found Petri wiggling around on the table.  He plopped out again.  Not knowing if he was sick or hurt, my parents took him to the humane society for treatment.  We called today and he is hanging in there.  We hope he can pull through and be released in a couple weeks.  But we can't help feel sad for his separation from his mother.  Unfortunately, we don't have a safe anti cat prowling yard for Petri and his mother to have naturally survived this growing up process for baby mocking birds.  But I pray for him to be on his own one day. 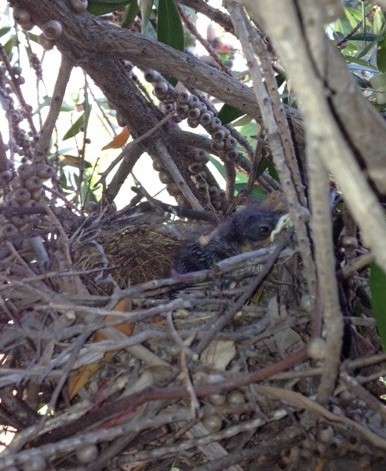 I felt the need to share this today, because Madalene had such love for birds (hence the header).  She used to tell her grandchildren that if they were good, a little birdie would give them a treat.  So she would wrap up little candies and sweet cough drops in a piece of tissue and leave it on the windowsill for my mom and her siblings to find.  This memory of her is one of their favorites.

But I hope I did a good deed by doing what I thought was best for Petri.  May he survive and live a long healthy life.
Posted by Christina Marie at 12:41 PM